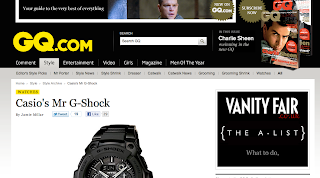 Here's an extract from the interview.

How many broken watches do you have at G-Shock HQ?
When we first launched the G-Shock Mr Ibe, who developed the first G-Shock and broke 100 watches every day. But now we have a basic structure, so to make one new model we break ten. Of course we have a level, how far we can go, but we like to test to the maximum. The model can go even higher than the level we advertise, so we go even higher so we can know exactly how far.

What's the most extreme thing you've done to a watch?
Sometime we drop the G-Shocks from the sixth floor. We just do it as an experiment!

Where do you get your inspiration?
The concept is G-Shock for the ultimate environment. We had conversations with people who work in extreme jobs such as firemen. For the aviation model we exchanged opinions with pilots. By having a conversation, we develop.