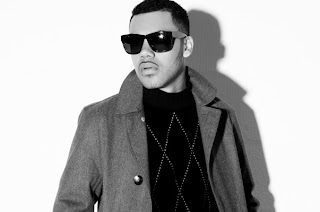 It's the return of Theo Kerlin, AKA Master Shortie. The south London MC has been through many stages in his career - including being the first artist to work with producer Labrinth (the pair did Shortie's debut 'A.D.H.D', a long time before Tinie and Pro Green got near him.

Shortie returns this summer with a mixtape, 'Studying Abroad', that features, among others, Bruno Mars, Bluey Robinson and Ed Sheeran. We have a quick catch up with the MC Master to see where he's been and where he's going.

So what's happening? Where have you been? Didn't you retire? Are you still signed? Fill us in...
Yep I retired for seven days. I had actually just reached breaking point - the truth is the label I signed to in the USA (hitzcommittee) dissolved and on top of that for a minute I was homeless living out the boot of a car. I had a bad night and I reacted- I went underground and had to be talked back into the game by my manager and supporters. Now I look at that time as a very dark time indeed. Not somewhere I would wish upon anybody at all. Keep well away.

Are you signed now?
I am not signed. Let me just repeat that - I am not signed - I would like to be signed but for now it's about putting my music out for as many as want to hear it.

'Social Groups' is pretty sick! Is there a sample on there?
Lenny Williams's 'Cause I Love You' is the sample in the background. Thanks for the love shown toward the track.

Tell us how it sets you up for the mixtape, and presumably forthcoming album?
The Mixtape will still have that Shortie cross-genre style but hopefully lyrically it will have progressed - that's all I can hope for. Anything else is a bonus-so far so good!

You seemed to have upped the lyrical levels - is that fair to say?
I had to up the stakes on everything. All you can do is try to get better at what you do. People have picked up on the lyrics this time which makes me happy and means I'm growing. As long as I'm growing up, that's OK for now.

The mixtape looks like it's got some serious guests. How did you hook up with Bruno Mars and Ed Sheeran?
The mixtape has some great guests - some "borrowed" (laughs) some legal. Ed is an old mate and I love his music.

Since you worked with Lab, he's become quite a big deal. Will you be working with him again?
Would you believe I still have tunes that we never put out from the first time! Labz is a genius and I was fortunate enough to be first in line so I am still the only artist that he has ever produced a whole album for. I will be putting that album on iTunes again soon. I'm very proud of what he has achieved- very proud - we are all his children really. I will be doing stuff with him in the future, but for now he has his album to finish and I must respect that. He has already given me soooooo much.

What's been the toughest decision you've made within your career?
To admit that I was an a**hole in the past and dust myself down and start again.

What's the toughest part of your job?
Realising that not everybody is going to like what you do and that you have to just speak to those that understand what you are about and hope it spreads.

Where can people catch Shortie next? (Live, releases, websites etc)
Check my site. It's early days but I'm happy. I just want to get better that's all.

Posted by hattie collins at 4:19 AM