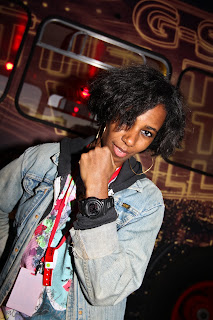 The woman behind 'Creator' stopped by the bus for a quick chat.

What's the toughest part of your job?
I think the toughest thing about being the type of artist that I am, right now is to keep your integrity. It's a really weird time for music and i feel like people aren't that interested in the integrity of a real artist and real integruity. So it's been really tough for me to keep doing what i know is right for me and just know that everything else is going to open up. There's so much temptation to compromise. But you can't compromise.

So there's no David Guetta/ Far East Movement or Black Eyed Peas on your album?
I don't even know what that stuff is. Like 'What?' No, there's nothing like that on my album (laughs).


Santi will be dropping her new album later this year. In related news, the quite brilliant video for her collaboration with the Beastie Boys just dropped. Check out 'Don't Play No Game That I Can't Win'.

Posted by hattie collins at 9:42 AM