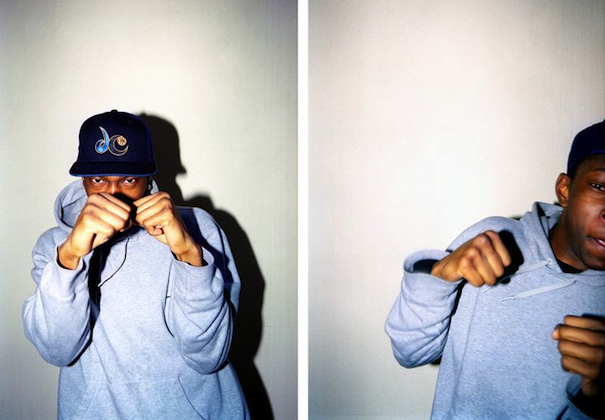 G-Shock recently caught up with the esteemed photographer and documentary maker James Pearson-Howes, his work has been featured just about everywhere from Vice, RWD, Dazed & Confused to New Order Magazine and The Independent; as well as commissions from major record labels Atlantic and Virgin Records plus outside of the box exhibitions backed by the likes of Mother. If you're a budding creative have a read to find out JPH's tips, his rise to success and the toughest thing about his job.

What made you get into photography in the first place?

Because I wasn't good at anything else (laughs) apart from art. I'm really dyslexic so that was the one thing I properly excelled at and I had a good run of tutors who actually encouraged me to go into it. Then I went to university because I wanted to make money from it, I went to London College of Printing which is now LCC and the rest is just getting into editorial photography and I took it from there really?

What do you think your first big break was then?

I remember my first sort of successful piece in an established magazine, it was really pleasing, I did that for The Independent. It's just nice because I grew up knowing those newspapers and thinking I'd like to get my work in those publications and by the time you achieve it, you know, you set your goals even higher.

What do you think has been the most exciting point of your career to date?

At the moment I'm doing this whole British folk project where it goes back to the traditions which is really nice, sometimes they become vanity projects but it's been an eye opening project and something that I've always wanted to do travel around England and I've nearly finished it now. I'll probably finish it by the end of this year it will have been five years in the making.

As well as RWD's DECA exhibition which you recently worked on, what other exhibitions have you been really proud of?

We did one recently with ad agency Mother and Will Robson-Scott, both me and him worked on a project about buses. Taking shots from the top deck of double decker buses for a year and it's just sort of nice for a project that you've worked on for a while to be resolved. We got a graphics company called Utile Creatives to help us design it all and Utile Clothing helped us sponsor it so it was nice to be a part of a little mini collective really and have it shown at a great place which is Mother, one of the biggest ad agencies in the world, hopefully we'll tour that as well.


Untitled from James Pearson-Howes on Vimeo.

Who has been your favourite music artist to shoot?

Dizzee Rascal without a doubt. He was the most fun we shot him for Vice years and years ago, I can't remember but that was before Boy In The Corner came out and he was so much fun and had so much energy. Professional wise Kelly Rowland was a lot of fun, really professional and great to work with, easy and open, you know not everyone high up is difficult to work with.

Who's still on the list of people to shoot?

Okay yes that is a bit much, what about the times you wished you would of taken a photo then?

Well once I went to go document a prison and I got a chance to go and walk around this prison with all of these ridiculously hench, muscly murderers around me. The prison warden asked me if I wanted to go and visit one of the cells. I walked into this guys tiny little cell and he had all of his breakfast cereals stacked in pyramids, everything was in pyramids; it was the most amazing thing but I felt really weird taking a picture in his only private space for God knows how long. What I should of done is asked which I've never hesitated about before but I dunno I felt like I was invading his privacy.

What other photographer's are you into?

What is the toughest thing about your job?

People not turning up (laughs) and also the constant one man band show. You know if you don't wake up early and you're not constantly chasing new work… you need to be pushing it hard constantly.

What is the toughest part of your body?

Have you got any tips for budding photographers/documentary makers?

Ooh difficult don't do it (laughs).  No, no, no, it's just something technical I'd advise someone to do first, shadow someone who is really geeky and technical because if you want to make money then that's the way that things are moving and the rest will slip into place.

Tell us about your upcoming project?

I've got an exhibition coming up at the J&A cafe on the 5th April. It's a collection of images that I've taken in various fashion houses, from fashion creatives to directors and the studios they work in. There's one shot which is nice we went to Stone Island and took a picture of this woman working and it's just a lonesome shot of this woman and that's one of my favourite images from the exhibition.

To find more of James Pearson-Howes work head to his website and make sure you check out his exhibition (details below). 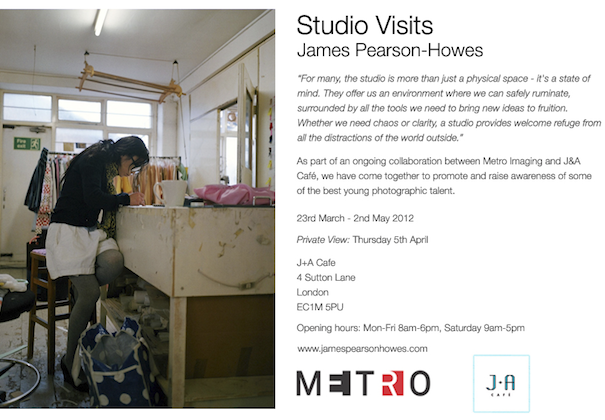 Posted by hattie collins at 7:13 AM