Farrell is a new Menswear brand created with a direct nod to Saville Row tailoring, in honour of Jack Farrell, aka Jack the Giant Killer, a notable dresser.

The collection was devised by Robbie Williams, Jack Farrell’s grandson.


Farrell, a new menswear label launches in September with a line targeted at guys who like a bit of snap in their clothing – be it for a night out, an afternoon at the footie, or lounging around at home. “Wear it in, wear it out” is Farrell’s motto.

The collection is named for Jack Farrell, aka Jack the Giant Killer. Jack was a notable dresser, a Stoke-on-Trent native, who lived a hard life but lived it well. A strong man, Jack believed in honesty, integrity, good manners and a sense of honour. The Farrell range was created to honour Jack’s legacy, the result is a collection that balances past influence with modern male style.
The AW11 collection will be sold exclusively through House of Fraser department stores, and online department store very.co.uk. Future collections will be available across Europe. Retail prices start at £35 for lightweight t-shirts, through £125 for knits, to £350 for the Banks-wool ¾ length coat. 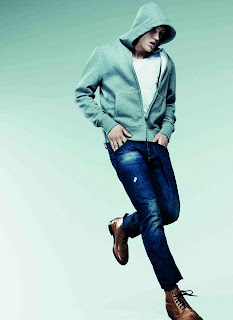 Check out this film 1/3, narrated by Robbie Williams, to support the launch of the superstar's clothing line Farrell.
Posted by hattie collins at 7:38 AM