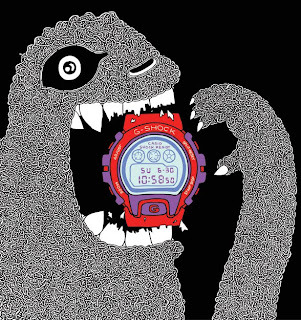 Congratulations to Polish born, London living illustrator Filip Ziebo, who designs under the name Ziebo. This 26 year-old impressed us all mightily with his incredible Godzilla inspired illustration which nods back to G-Shock's country of origin, Japan.


Why did you enter the competition?
I found it at the last minute via Twitter and after looking at the illustration, that Ben from UFO prepared for G-Shock and I thought I would give it a go and create something myself.

How do you think your illustration reflected the brief?
I was trying to show to show that G-Shock watches are even tougher than Godzilla...!

What inspired your illustration?
I wanted to illustrate how unbreakable the G-Shock watches are and because it's a Japanese company I was thinking about Japanese symbols and characters - and I decided to draw my own version of Godzilla.

Why do you think you managed to beat off the competition with your illustration?
Because I was doing the drawing last minute I was more focused on finishing it than actually winning the competition. I really like working on tight briefs and deadlines, some of my favourite drawings have come out this way.

What's the toughest thing about being an illustrator?
Because I'm just starting out, I don't have an agent and it's tough as sometimes you have to spend more time networking than actually drawing.

What's the toughest decision you've made in your professional life?
Coming to London was a tough decision as I had to leave my friends and comfortable life back in Poland to find more work opportunities over here. But I don't regret that decision as London is a great city to live and work and have fun in.

What are your ambitions for the future?
I'm starting an illustrated t-shirt label called 'Luksodrome' with my girlfriend who is an animator. We are putting up a webshop with some t-shirts and prints but in the future we want to publish artist's books and zines as well. Basically I just want to draw non-stop with little breaks for taking pictures and listening to music.

Where else can people see your work?
People can see my work on my Flickr and for more information on projects that I'm involved in they can follow up on my Twitter.
Posted by hattie collins at 7:41 AM