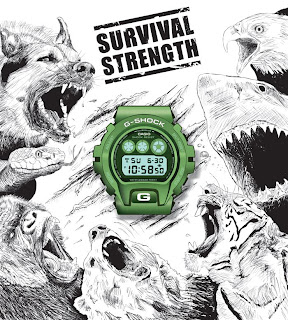 27 year-old Watford born Tom has been living in Toronto, Canada for the last 18 months. This graphic designer and illustrator is a partner at Core. He has been working in the industry for three years, specialising in branding, graphic design and illustration.


Why did you enter the competition?
I hadn’t entered a design competition before, so I thought this would be a great opportunity to give it a go. G-Shock is a cool brand, so it was something to easily get excited about. In fact, whilst I was illustrating the watch itself, I remembered being at school and being jealous of other kids who had these awesome new Casio watches – I really wanted one! So maybe this was a strange way of compensating for that, back when I was a wee nipper! Who knows?!

How do you think your illustration reflected the brief?
Well the brief called for the emphasis to be placed on the toughness of G-Shock watches, so I wanted to do just that. I spent a long time brainstorming different ideas, exploring different routes and even produced a couple of iterations, but the idea that I felt worked best was the watch surviving a vicious attack from nature. I wanted the watch to really look as though it was completely unscathed from a savage attack – it’s that hardcore.

What inspired your illustration?
When it comes to my illustrations I’ve always enjoyed drawing and observing animals – I don’t know why, but they’re an endless source of fascination to me so I guess that was an unconscious starting point. The inspiration for the illustration itself actually came from the image of the dog barking. I was trying to find ‘tough’ imagery and when I came across the photo I referenced for the dog, it looked so ferocious it just seemed perfect. It’s hard not to get a kick out of drawing a shark an eagle and bear all in one piece!

What's the toughest thing about being a graphic designer/ illustrator?
I love what I do, and there’s not much I can worry or complain about, but I guess the toughest thing would be managing client expectations. Every project will have differing scopes and should always be taken on their own merits, but it can occasionally be a struggle to convince a client that they would be better off taking a different route, or that there might not be a ‘quick fix’ to their needs. I think that part of the problem is that we are so overwhelmed by media and visual imagery that more and more people take design work for granted. I think that unfortunately people expect innovative ideas and beautiful work, but might not know how to value it. That’s the trick – finding the clients who truly value what I do, and making sure I communicate my ideas as efficiently as possible.

What's the toughest decision you've made in your professional life?
Moving from England to Canada was on the one hand a no-brainer, and yet at the same time a tough decision. I met my girlfriend Aurianne in London while she was travelling, and so when she was forced to move back to Toronto I decided to move with her. That was the easy part! It was a tough decision however, (beyond the obvious difficulties of leaving family and friends behind) because my design partnership was doing well at the time, and we were building a decent client base in the UK. It was a difficult choice to make, but it’s proved to be the right one. Now we have clients in the UK and North America. Stepping out of my comfort zone has been great for my career and I’ve had all sorts of opportunities I hadn’t dreamed of before making that leap.

What are your ambitions for the future?
Career wise things have been going great recently, so it would be nice to see that continue, and I’m really keen to do some more collaborating with other artists. I guess I just want to continue to have opportunities that let me develop my style, experiment and just keep doing what I love.

Where else can people see your work?
You can find my company’s design work here, and more of my illustrations on my personal portfolio here. You can also follow my updates via Behance, and Twitter or Facebook

Posted by hattie collins at 4:07 AM