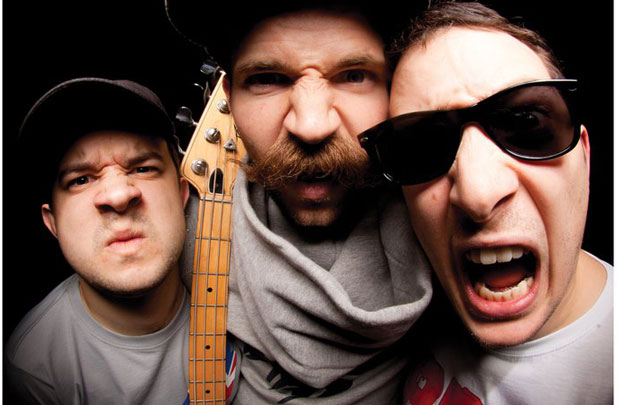 Tom ‘Froe’ Barnes, Ben Kohn and Peter ‘Merf’ Kelleher had a great 2010 (albums cuts for Tinchy and Devlin followed a cut on Lily Allen's Alright Still album), and a very impressive 2011 (No.1’s with Professor Green (Read All About It) and Dappy (No Regrets). We can only imagine what 2012 has in store for the talented trio! Well, actually, we know what 2012 has in store for these three friends, cos we popped to their west London studio for a chat. Get ready for singles with Devlin, Clement Marfo and Dappy's Brian May featuring next track, Rockstar. We had a chat with Froe, to try and discover how on earth they do the darned thing.

You’ve been in the game a while; initially making dance music and travelling the world.


How have you managed to make such major moves in the world of urban/ pop?
When we started we were making hip hop, then we moved on the dance stuff, then for a few years in-between we weren’t really sure what we were doing, we were just copying Amy Winehouse tunes, doing what we deemed as pop. Then the urban thing came into the forefront at the same time as us, so we decided to start making the music that we enjoy. If you’re trying to do stuff that you don’t enjoy, it’s never going to come out that well. You’ve just got to go with what you believe in. We did Spaceship for Tinchy and Dappy, that was our first single, and from then on we’ve just been really going for it and running with all the ideas that we think are really great.

There are three of you, who does what?
Well I’m the drummer, Merf went to uni and did a sound design course, he can play a few different instruments, he’s a bit of an all-rounder. Ben is a people person, if we do a session he gets the most out of artists and leads the way. That’s how it rolls!

Are there artists that you work particularly well with?
We work well with Dappy – he’s like a driving force. If you’re doing a tune with him and it ain’t right, he’ll tell you it ain’t right, and he’ll tell you to fix it. He’s a perfectionist. Dot [Rotten] is someone we work well with, he’ll come into the studio and just search through our hardrive and find beats that we’ve done on like a Sunday afternoon in fifteen minutes and turn them into something. It’s easiest to work with the people you’re most comfortable with too.

Anyone you’re working with at the moment who you think might come through in the next few months?
We’ve got Dappy’s next single, he’s got Brian May playing the guitar! We’ve got Tulisa in next week, she should do some good things. There’s a kid that we’re working with in the next few weeks called MNEK– he’s one to watch definitely. He could be the next Labrinth. We’ve got a single coming out with Devlin and Jagga, who’s an artist signed to Sony, it’s a TMS featuring record called Keep On The Light. That’s one to watch out for, it’s us exploring our non-pop side. We’re not trying to make a massive impact - we’re just doing it for sh*ts and giggles, as they say!

What’s the goal for TMS?
We want to cement ourselves as being consistently at the top of the UK music scene really. We want to make sure this year is better than last. We’ve got some more hits on the way, and then I guess we’ll try and crack other countries as well. But right now we’re just trying to crack the UK.
Follow TMS
Like TMS

Posted by hattie collins at 2:12 PM