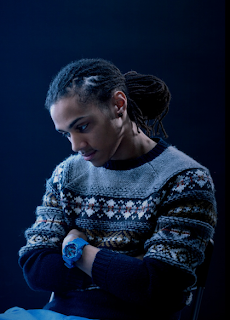 The rather handsome and supremly talented Bluey Robinson recently chose himself a new watch - in blue naturally. Bluey, sporting the GA-110HC watch from the new Hypercomplex range, is set for greatness in 2012! Having toured with Justin Beiber and Tinie, we cath up with Bluey to find what's new.


Can we hear some good Justin Bieber tour stories please!?
There was one time, we were in the cafeteria, and he just decided to take off all of his clothes apart from his boxers! (Laughs). He just pulled down his trousers, took off his top and was just sitting at the table eating, and his friend Ryan, he did the same. It’s his tour, he knows everyone, you know… It was funny man. But I definitely didn’t join in. I didn’t get naked with the Biebster!
You also toured with Tinie last year - how was that?
There are probably more stories from that tour, but I probably shouldn’t disclose that information [laughs].
What new music are you into right now?
Definitely Dot Rotten and Attacca Pesante. Oh, and Luminites, they’re really new and a little bit different.
What’s the toughest part of being a singer?
Probably getting people to understand you, and also standing out from the crowd.
RWD: What’s the toughest decision you’ve ever had to make?
I was about to sign to one management company where there was a guaranteed single or two, but it was just me featuring on other people’s work. Then I met my current manager, who was more into what I was doing myself and we got on really well. I had to decide which to go for in the space of a day. That was pretty hard.
We’ve been fans of you for ages; following <Showgirls and <Coming Back<, when will we see a Bluey Robinson album?
It’s out next year, but I’m going to do an EP with a load of collaborations, that’s going to come out first. I’m looking to do some cool collabs – hopefully get Dappy, Dot Rotten and Ed Sheeran on there.


Check Bluey performing Stevie Wonder on the streets of Belgium earlier this year.
@blueyrobinson.
Image by Jake at Response.
Posted by hattie collins at 4:47 AM