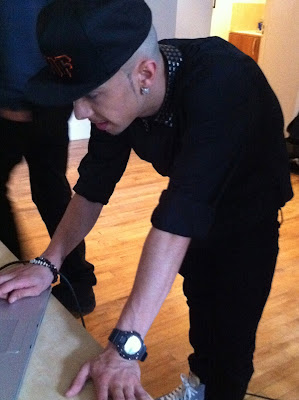 I’m a good, warm-hearted person. I am a bit spontaneous. I get hot-headed, I do get in trouble. But I’ve made a conscious effort recently to think before I speak. I want people to talk about my music, not me. The music comes first each and every time.

With a No.1 and a No.2 single under his belt, expectations are high for Dappy's debut solo album, Bad Intentions, due on 22 October.

Below is a sampler of what's to come from the record. Before that though, we had a chat with the multi-platinum selling singer, rapper, writer, composer and producer.

Tell us about the album please.
What you’ve heard already - Rock Star, No Regrets, Tarzan, Good Intentions etc., -  is just one side of the album. I’ve established a lot of genres of music on there; R&B, pop, hip hop, bashment, rock, ballads, it’s a bit of everything. I wanted to show everyone that you have to be able to do everything to be a great artist; you can’t just rap, you can’t just sing. So I’m killing it with the metaphors and the punchlines for the rap thing and then I’m killing it with Adele type singing on the other side. I’m going in, man, on each and every type of angle.

The majority of artists in our scene, they’re all afraid to expand their degrees of knowledge of music. They’re very narrow-minded, you have to be open-minded.

What's your favourite lyric on there?
I’ll tell you right now. On the Intro, I say ‘I feel to say some sh*t and tattoo it on my skin/ But when there’s so much to address, tell me where the f**k do you begin/ I think I’ll start with my community/ When I see Cameron I should grab him by his neck, and raise him up like a uni fee/ How can these greedy bastards put our tax in their pockets/ Fuck an MP, to me, that just stands for Maximum Profit...' I don’t think people these days are smart enough, so I want to show them. That was my frame of mind. When there’s so much to address, I thought if I mixed the political talk with the street talk, that will get people talking. Hopefully it will make people look at me different.The majority of artists in our scene, they’re all afraid to expand their degrees of knowledge of music. They’re very narrow-minded, you have to be open-minded.

How did you get The Wanted on the album?
Their manager got in touch with me and I was supposed to write a track for them. But I liked what I wrote so much I was like ‘F**k that, I’m keeping this for me!' (laughs). Fraser T Smith produced it. I've got Marga on there too, but the rest is me proving myself as an artist. I need people to hear it and say ‘this kid can go in'. I don’t want too many features on there. It's my baby.

You're quite a perfectionist, right?
With every note. Like they left one mistake today in the master. It drove me crazy. It was just one high-hat – tss – you can’t probably even hear it. But it should have been muted. Composing is a big thing, especially when you do it all yourself. You know how you want it to sound. I need it to be perfect for when I listen to it. Otherwise, every time the album comes on in the car or wherever, I’m going to want to turn it off. All I’m going to hear is that high hat.

How did you develop your musical knowledge and ear?
Well, my pops, obviously. When we were bunking off school to go studio, I’d learn there. I’ve got bat ears. I’m grateful to whoever gave me then. If you hear something amazing, your ear should go clammy. That’s what good music is supposed to do. It’s supposed to bring good energy, it should go clammy. It’s a deep thing. If something is sh*t, or ain’t booming or ain’t unique, it’s not going to tickle. When something is amazing, it’s like… your ears should tickle. The ears are a very important thing. That’s what made me the way I am. That, my bat ears, and my dad, and bunking off school from 13, and going to Dollis Hill, Willesdon and Neasdon to where we had the studio. That was it.

I never ever use paper or pen. Always in the brain. If you’re reading off paper, spitting in the booth, that’s unnatural. You have to have it in your brain.

There's a theory that all great creatives spend at least 10,000 hours perfecting their craft.
(Incredulous look).  Oh yeah, loads of practice. I did that probably just in my teens. In the Likkle Rinsers [the original name of N-Dubz)] alone, we did hundreds, thousands of hours. Even with Tulisa and Fazer, from the minute I stuck us lot together with dad, I knew exactly what to do. The hat. I’m not stupid. Putting a hat with strings on it up in the air, with a girl in the middle – sorry, no one looks like that. That’s getting famous straight away. I knew what I done and it worked. That was the easy part. We’re known now, now how do we stay here? We sold albums and went double-platinum. And we left it there. I thought ‘Lets not do a fourth album and sell 200,000. Lets leave it there’ See you lot later, you do what you’re doing and maybe we’ll do something again in the future. But yeah, when I put Tulisa and Fazer there, I knew what type of music I was going to make; me fighting the girl and Fazer fighting the girl, female male perspective, arguing, teenage fanbase, singing along and catchy arena music. I knew it would work. Now it’s gone I can bring out my new thing, I’m not a stupid boy. Now I can go in. I want to keep switching, do bashment, do pop, do hard rap, then a ballad, then an acoustic. I wrote a song called I Owe You. I wrote it for my mum and it’s psycho, it’s powerful man. It’s too deep. I’ll get emotional when I sing it. The bars are stupid, it’s so powerful. It’s me saying ‘I owe you one’ to my mum. Fraser T on the guitar, and me. I did it in one take.

How you write?
I never ever use paper or pen. Always in the brain. If you’re reading off paper, spitting in the booth, that’s unnatural. You have to have it in your brain. Reading off a Blackberry or paper doesn’t seem natural. Look at the mic and let it come out from the brain.

Now Dappy, you do get yourself into trouble a lot. Do you have good intentions at heart?
I’m a good, warm-hearted person. I am a bit spontaneous. I get hot-headed, I do get in trouble. If someone chats sh*t to me, then I’ll say something back. You’ll always be able to take the boy out of the hood, but you’ll never get the hood out of the boy. I’m gritty. But I’ve made a conscious effort recently to think before I speak. I want people to talk about my music, not me. The music comes first each and every time.

Fishing? When my dad died I carried on his legacy; man against nature. I love it. I went to a tackle shop and I spent £8000. If you think that’s a joke, come fishing with me.


How old were you when you bought your first album? What was it?
I was 11. It was some punk-rock CD called The Offspring.

What song makes you cry?
(laughs) The Titanic theme song, by Celine Dion! My Heart Will Go On. When I hear that, I get water in my eyes, I cry. I think about one of my female loved ones – my mum, my girl, an aunty – I think of them drowning and me having to let them go.

You're a keen fisherman. What's that about?
Before my dad died, he was born in Egypt, he was born into that whole 'man against nature' thing. Then he went to Africa, then to Greece, met my mum, come back here, so he used to love fishing all the time. So when he died I carried on his legacy; man against nature. I love it. I went to a tackle shop and I spent £8000. If you think that’s a joke, come fishing with me.

What's the biggest fish you've caught?
A 12lb carp. You don’t eat them, you take a picture, you put it back.

What's the most you've ever spent on something?
£12,000 on jewels in Trotters, Bethnal Green. Also £8000 on fishing equipment.

What’s the toughest part about being Dappy?
Trying my hardest to get my mum out of the hood into a nice place. I will go and view a house, I’ll like it and my mum will come and see it and say it’s sh*t. So we keep looking.

How about the biggest lesson learnt?
Don’t be so genuine; don’t splash your money and help people. And don’t give your trust to just anyone cos people will backstab you. People are two-faced. It’s a very snaky business. 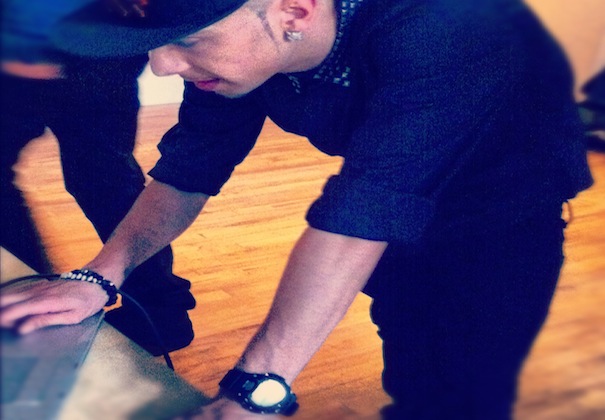 Posted by hattie collins at 7:43 AM