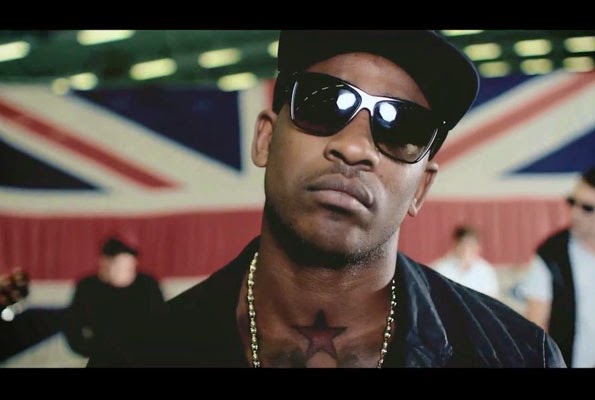 We talk to Boy Better Know's Skepta about making new single 'That's Not Me' Ft. JME on the same keyboard that created many a Grime classic.

"The whole point of 'That’s Not Me' was just to make a video [the video, directed by Uzi was shot on VHS]. that’s it. It wasn’t even supposed to be a single. The video was like a freestyle, it wasn’t even a proper video; we just played it out the car and vocalled it. That was supposed to be it, something to keep people going until my album Konichiwa drops. So it's crazy that it's blown up.

I made the beat. I was at Paris Fashion Week and I was in this club, listening to what was being played, and thinking about taking it back to the old sound. I was sitting in the corner of the club, on my own, just recording the rave on my phone. I recorded like seven minutes of the different tunes the DJ was playing and when I came home, I listened to it over and over. I thought 'What Grime song would work in here, what would fit in but also sound fresh and different next to these other tunes?' I had the beat in my head, I knew what I wanted to sound like it. I wanted a proper old school sound, I wanted to take it back to all of the old grime songs, but I wanted to do it properly. So I phoned Jammer and I asked him, ‘Jammer, where’s that keyboard you used to use back in the day’. Originally it was Jammer's keyboard had it but obviously cos he’s been producing for so long, he had forgotten about over time. He said ‘Oh I gave it away’. I was like ‘What! Phone the guy’. So he phoned the guy and the guy's like ’Yeah, I’ve got it but it’s at someone’s else's house’ or whatever. Anyway, we drove around the houses, and finally I got it. The keyboard is so heavy cos it has a million songs on there.

I turned it on and it’s got all the old grime sounds on it. All of the early Jammer, Wiley sounds were on there. All of the old Grime was made on that keyboard. All of it.

It's funny that by trying to be as grimy as possible you can end up seeing commercial success and vice versa. You can make a tune you think is an obvious radio hit, and it doesn't get played. I tried to be as taboo on the original version of 'That's Not Me' cos I thought it was going to be really grimy, just for the Grime fans, but mainstream radio still played it. They played ‘sket’ on the radio, it’s mad! That’s why I said on my next one, I’m gonna murk. I’m not even gonna think about it, I’m just gonna murk. I’m going to get a beat that’s international though because as long as the beat can work anywhere – that’s why 'That’s Not Me' is working - even if you don’t like what I’m saying on it, you can still bounce to it. If people say ‘What’s grime’ they play that beat and that’s grime.

Now Nick Grimshaw and Fearne Cotton – loads of them – have played it. The pre-orders where mad so if it does well… I’m gonna go mental. I‘ve got my next video ready. I know exactly what I’m doing for it. People will go mad when they see it. I’ve got the beat as well so I’m gonna murk it. It’s like a party song, but it’s dark. I’ve seen now that murking and keeping it grimy is what I should do. I’m not trying to live in the past; I’m doing yesterday in HD."

Get 'That's Not Me' from iTunes here and support great music while you're at it!