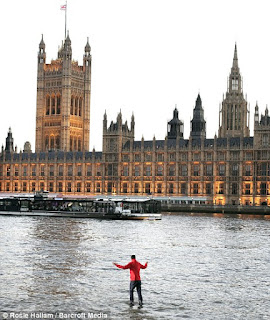 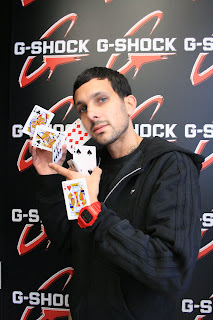 The amazing Dynamo, who has performed for everybody from Prince Charles and Richard Branson to Will Smith and Jay-Z, took his trickery to another level this weekend.

The talented Bradford magician walked across the River Thames (as you do) to promote his new series, 'Dynamo: Magician Impossible'. The show, which featues boxer David Haye and Ian Brown airs in two weeks on UKTV. With Chris Martin saying the 28 year-old performs "The greatest magic I've ever seen," it'll be well worth a watch. Tune in to see D move a tan line up a girl's arm, transporting a mobile phone into a glass beer bottle, bringing a flutter of paper butterflies to life and transforming snow into diamonds.

Here's some highlights from Dynamo's extraordinary career so far.

Posted by hattie collins at 8:47 AM